The best City building games where you can build houses, buildings, bridges and more on the land, reflecting your imagination .

City building games are a type of simulation game where players are city planner and leader. Usually, the player has a top-of-the-line perspective and improves the city by following different strategies. The player guides the development of the city using the options of building placement, assigning workers, and using resources.

TheoTown is a successful city building game that players who love graphics in pixel style can enjoy very much. TheoTown, available for free, has a retro-style game theme. You can play TheoTown, which you set up and manage a city, both online and offline. You can create your dream city in TheoTown, which is offered free of charge.

This game, which draws attention with its fun game structure and impressive visuals, has everything you need to build the city of your dreams. You start your own city from scratch. To achieve this, you have hundreds of different equipment, buildings and items.

That’s all our top 5 Best City Building Games collection. I hope, you will be enjoy this best games and also share it with your friends. ‘) 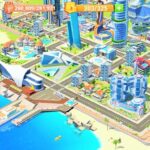